Do you know the origin of Christmas?

Catholic also known as Jesus Christmas ceremony. The date of the birth, the Bible is not recorded. In 336 AD the Roman

Church began passing this section on 25 December. December 25 was originally the birth of the solar god as stipulated by the Roman Empire.

Some argue that it was chosen to celebrate Christmas because Christians see Jesus as the just, eternal sun. After the mid of the 5th century,

Christmas, as an important festival, became a tradition of the church and gradually spread among the East-West Church. Due to the calendars used,

the specific dates and forms of the celebration vary. Christmas customs spread to Asia mainly in the mid of the 19th century, Japan and Korea were

influenced by Christmas culture. It has now become a common custom in the West to give gifts to each other at Christmas, and to add a festive

atmosphere with Santa Claus and Christmas trees. Christmas also became a public holiday in the western world and in many other regions.

Here we have many types glassware including: Glass pitcher, glass cups, glass coffee, tea mug, glass cup with saucer set etc. All can be printed  with

Christmas designs. Our designer team can make various designs for your choice or you can make custom patterns.

Normally, if you order 40ft container, you can mix 4-6designs. Package ways can be color box with Christmas designs too, check out our Christmas glassware selection for wholesale. 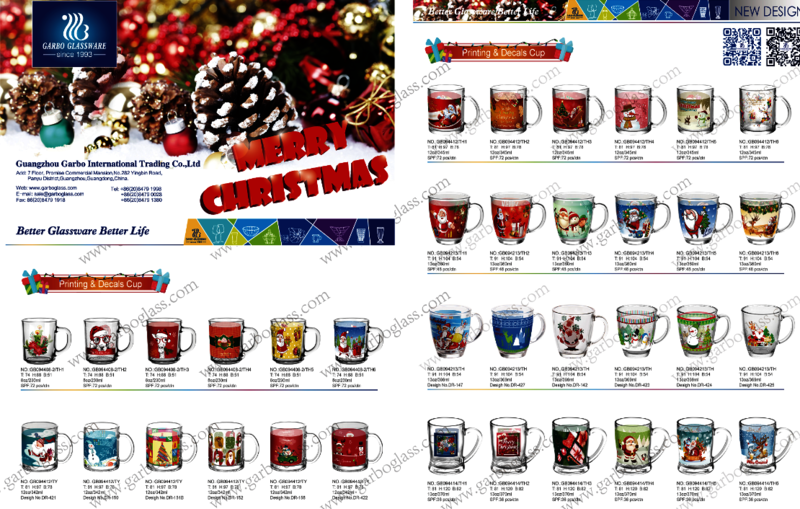