How does a beer glass affect the flavor of beer?

No good beer glass, no matter how good the beer is! You must need a suitable beer glass cup for your drink! In summer, no one does not love beer. 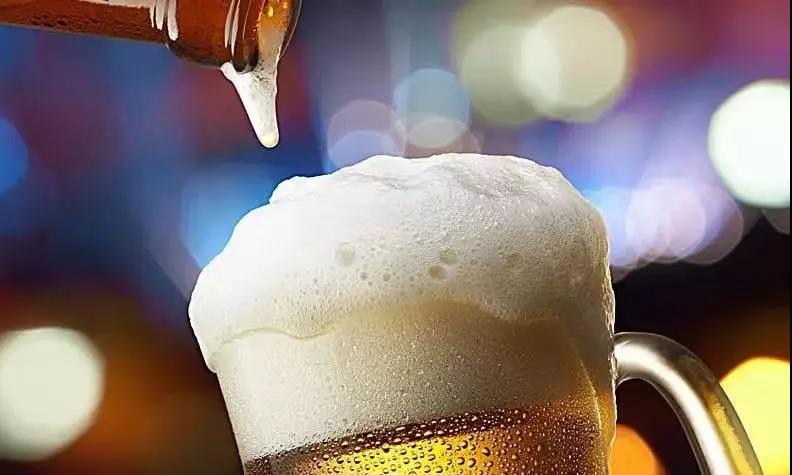 In the history and culture of beer, utensils are a part that cannot be ignored, especially beer glasses. Whether it ’s the most common draft beer mugs or the elegant flute-shaped beer mugs, they all have a common role-to deliver beer to the lips in a prominent, pleasant and even religious ceremonial way --"Beer Bible" "Author Randy Musha)

So, how to match beer with beer glass in order to preserve or even enhance the flavor of beer?

Hundreds of years ago, glass was still a very rare and expensive material. At that time, Europeans generally used wood and pottery, and even tarred leather goods as beer glasses. The rich will use tin cups, silver cups, porcelain, etc. The royal family and nobles also used luxury materials such as jade and ivory to make beer glasses.

In the second half of the 19th century, glassware became popular 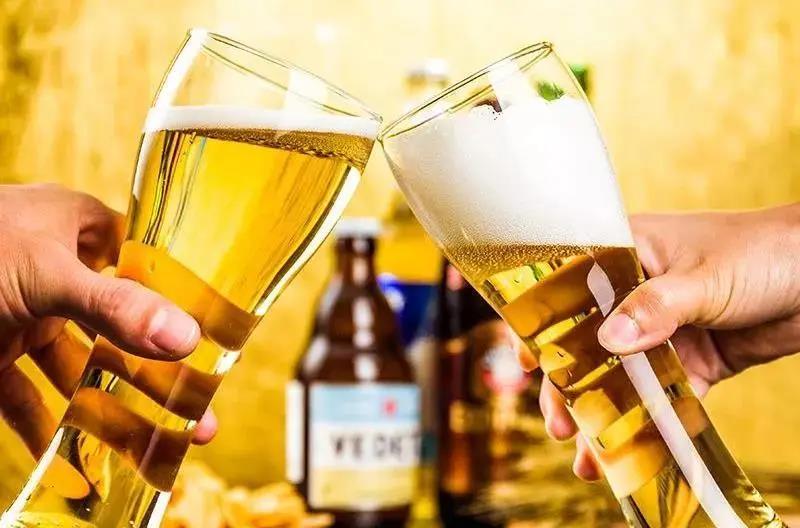 It was not until the second half of the 19th century that glassware could be mass-produced by machines, and glass gradually entered the lives of ordinary people. Nowadays, glass beer mugs have become one of the most widely distributed and most popular beer vessels in the world with low cost, transparent appearance and stable chemical properties.

How does a beer glass affect the flavor of beer?

The matching of wine and wine utensils has always been a lot of attention.

Choosing the right beer glass can make the beer's color, aroma, taste and taste reach the best state. The "Beer Bible" splits the quality of beer into the following indicators:

1.Smell (produced from raw materials such as malt and hops, but will be changed or increased by yeast)

2. Wine head, that is, foam (medium-length protein from malt and wheat, oats and barley. Affected by saccharification, may also be affected by filtration)

3. Color (mainly from the process of drying the selected malt for brewing, but it is also affected by saccharification and boiling, and even to some extent by fermentation and filtration)

5. Wine body and taste (protein in malt, affected by brewing, fermentation and filtration procedures; sweetness comes from various proportions and fermentation between malt and saccharification)

6. Flavor (malt, hops and brewing water, affected by many aspects of the brewing process) 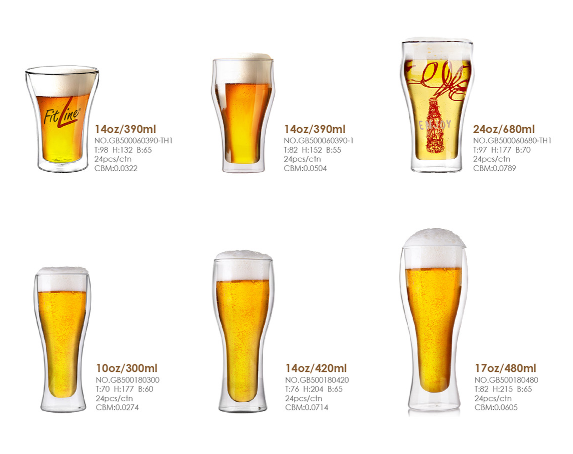 In general, the size of the opening and bottom of the cup, whether the edge of the cup is everted or bent, and whether the cup is slender or chunky, will affect the performance of beer aroma and foam. For example, a cup with a large mouth and a small bottom is conducive to the formation of foam; a glass with a narrower mouth than the body of the cup will make the aroma of the beer more concentrated. Some ingenious designs, such as wavy patterns, add a little optical effect to the beer itself. Large beer glasses usually require a cup handle and a certain anti-slip design to be at ease in the hand. At the same time, the handle of the cup can also reduce the effect of the temperature of the hand on the beer, because the biggest impact on the wine in the glass is the temperature at the time of drinking.

The wine glass itself can also be a work of art. Its design, overall texture and even thickness will unconsciously affect people's perception of beer. 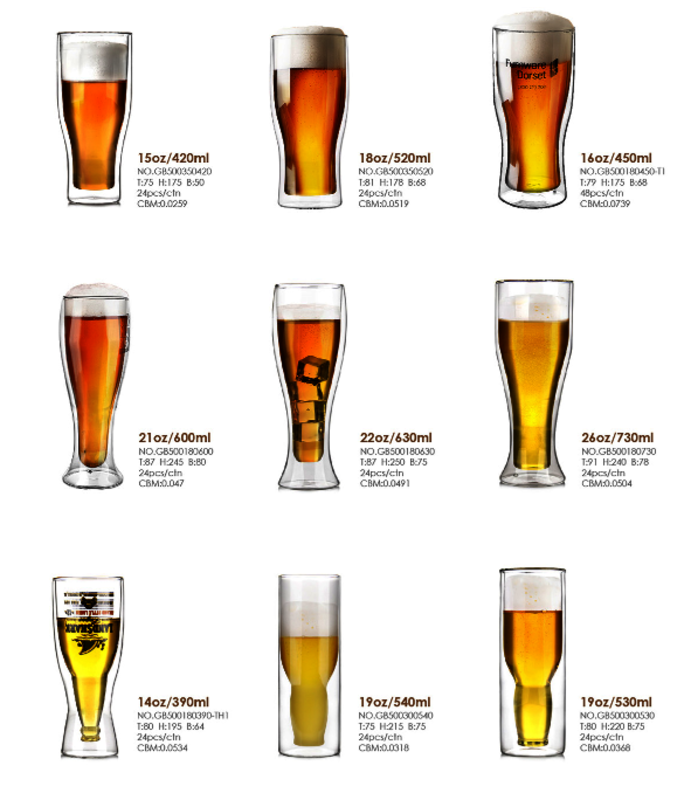 What are the modern classic beer glasses?

As urban people's demands for quality of life are increasing day by day, everyone has become more and more particular about "drinking".

However, the "drinking" things are getting more and more particular, but the methods have not changed much. 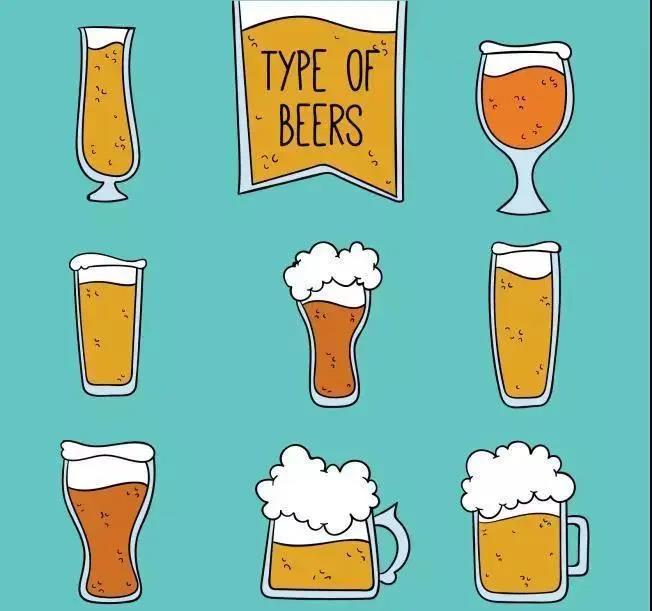 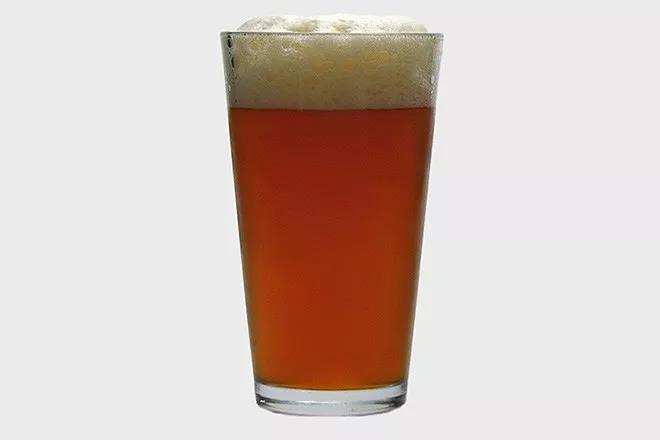 In addition, Nonic Pint retains the traditional pint cup styling characteristics. The straight body and wide mouth can allow the beer to quickly adjust the temperature, so that the malt flavor of the beer can be better released. It is suitable for Scottish dark beer. Too. 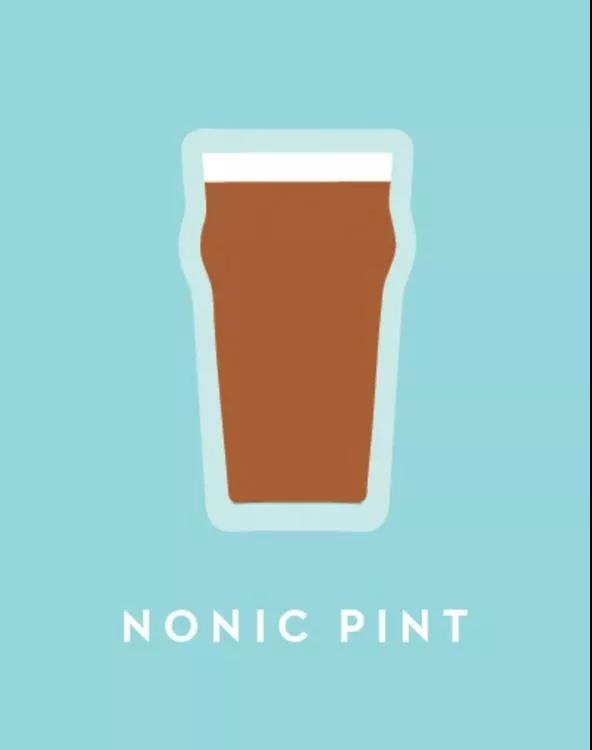 The biggest feature of Pilsner Glass is to create an elegant shape through the slender body, and it also makes it easier for drinkers to see the color and transparency of beer more easily. 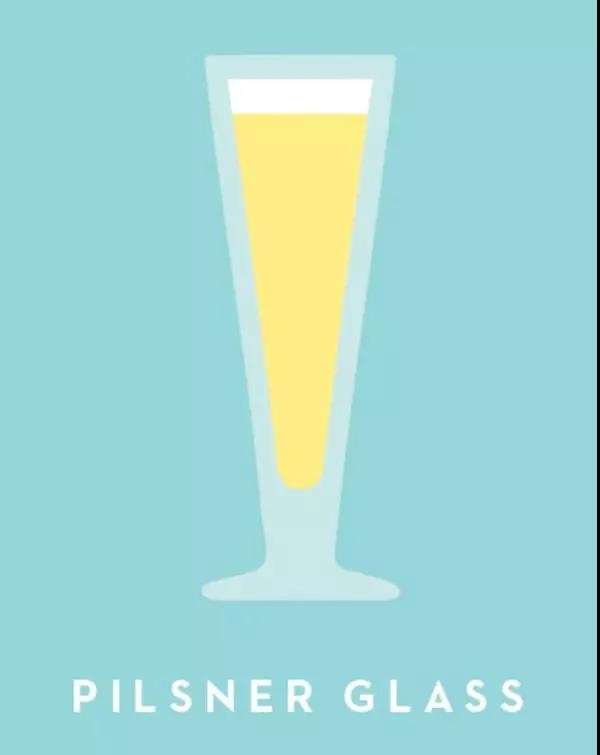 And the conical cup body can make the continuous foam better gather to the foam layer, and it is undoubtedly the best choice when it is matched with the white beer with clear color and smooth taste.

Many people think that this type of glass and beer should not match when they see the Cup shape of Tulip, but in fact it is just the opposite. The Cup shape of Tulip obtains the flavor substances volatile from the beer by shrinking the mouth of the cup. Better cohesion. 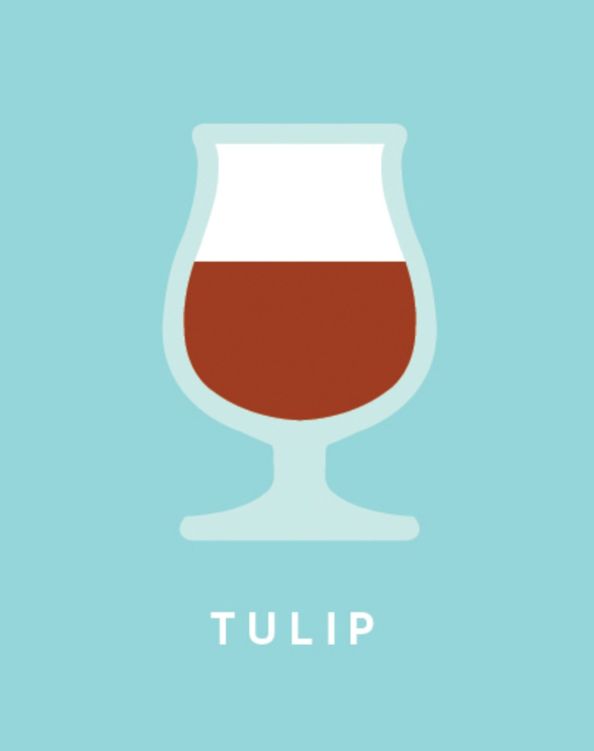 And the cup opening slightly like a tulip allows you to taste the texture of foam and beer more smoothly. Unlike the two wine glasses mentioned above, Tulip is more suitable for strong ales such as Scottish ale and Belgian "Monastery beer".

Looking at Stein's cup shape alone, does it feel that it is very similar to the cup of beer that we usually drink ~ Actually, the cup of beer is evolved from the type of Stein. However, unlike the cup of beer that is made of glass, the traditional Stein It is usually made of materials such as ceramics or wood, and all have lids to prevent mosquitoes from flying into the beer.

Nowadays, such beer mugs are usually used in crowded occasions, such as Oktoberfest, family gatherings, etc., to improve the atmosphere of the scene by drinking large glasses. Of course, if you drink like this, Nave thinks that it is best to choose Czech full beer, Munich beer and other flavorful beer.

How to pour wine to pour beautiful bubbles?

The foam of beer is an important indicator to measure the quality of beer. The delicate, white and smooth foam will make the beer taste cool and refreshing, and it can form a good thermal insulation layer to keep the wine warm. If beer and wine utensils are matched properly, and pouring wine is also a good way, beer can produce rich and delicate foam.

To pour out beautiful bubbles. First, prepare a clean cup. If soap or grease remains in the cup, the foam structure will be destroyed. When pouring beer, you must pour down from the middle of the beer glass. The force is to release carbon dioxide gas better. Then let the foam settle and repeat the above actions until the cup is filled. Only when a thick creamy foam forms at the mouth of the beer glass can the beer glass be tilted slightly or slowed down.

In general, the perfect wine head is at least one inch thick (2.54cm), but the thickness of the foam is related to the degree of beer carbonation. Some beer is not easy to foam, even if it foams, it will quickly dissipate. 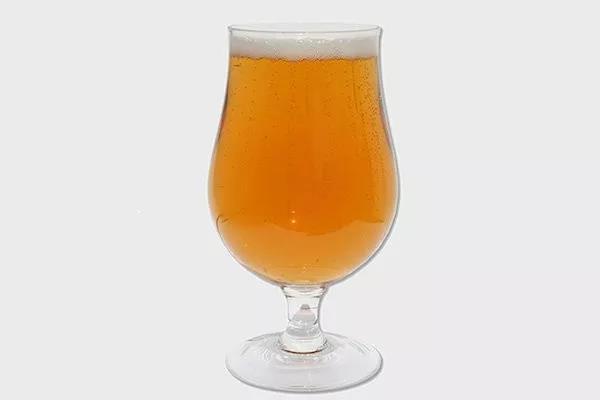 As the saying goes, "If you want to attack the right thing, you must first sharpen your weapon." Before enjoying a glass of craft beer, you must have a matching beer glass, because cups of different shapes may directly affect this glass. The feeling of craft beer when you taste it. 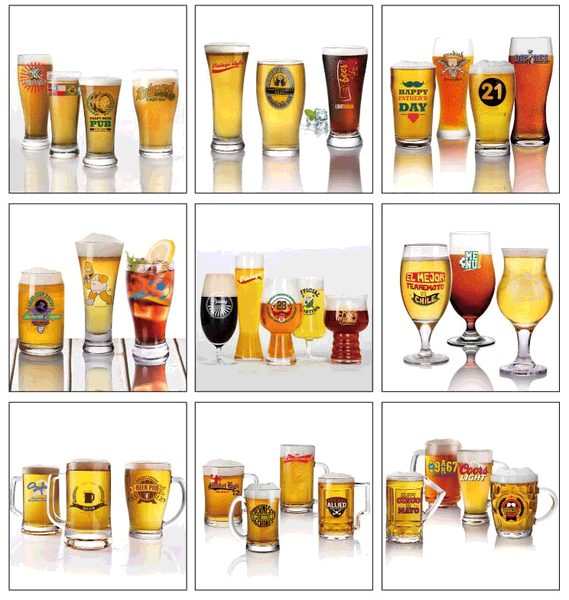 So, before you buy wine next time, remember to choose a beer glass cup!

Next: As a wine lover, you need to know different glasses for different wines